Frontiers Music Srl is pleased to announce the release of Simon Collins new album,
“Becoming Human”, on September 4, 2020. Today, Simon has released the first single
and video, the title track to the album. Watch the video 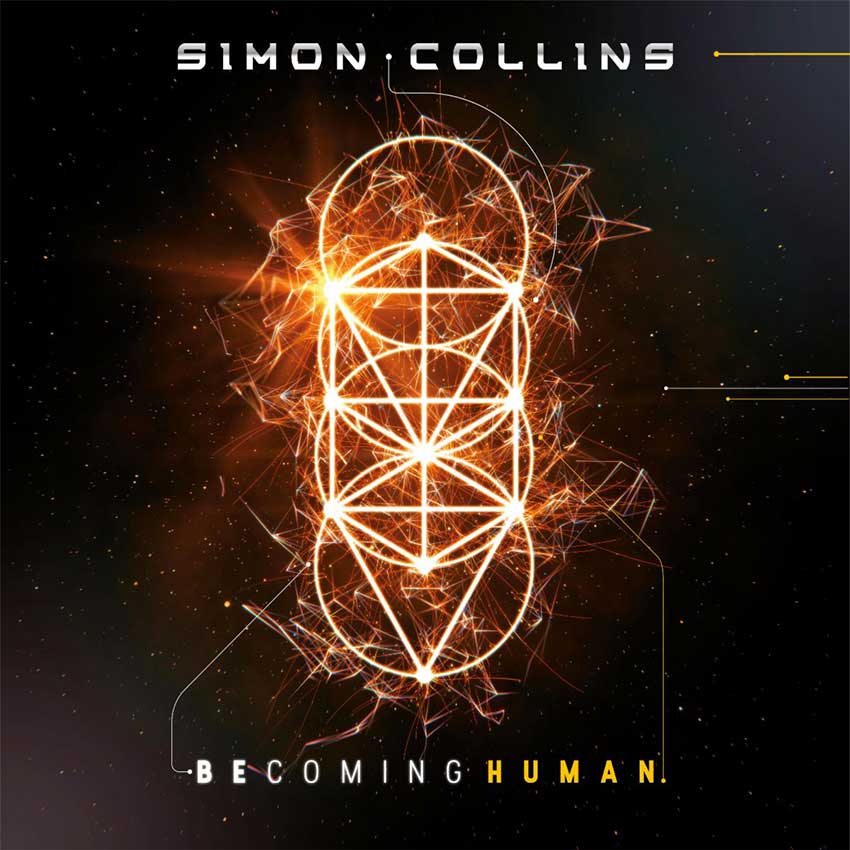 Simon Collins has been grappling with heady subjects while writing his new album. He
can spend hours discussing astronomy, cosmology, and quantum physics. He loves a
good conspiracy theory too, but the rollercoaster that we all face as we become human, is
the focus of the album’s theme. The album ultimately is a conversation about surrender,
renewal, uplift, and mortality. Not surprisingly, the album is called “Becoming Human.”

“I’ve spent a long time thinking about this theme, even the production itself was a micro
life-cycle,” says Simon.

“There’s a school of thought that believes humans become spiritual, but I think it’s the
other way around. To me, we are spiritual beings who are learning to become human. Are
we a way for the universe to know itself? Or is the universe a way for us to know
ourselves?” Simon asks. “I suppose you could make sense of it either way, but the two
mean something different.”

Collins paints with a range of emotional colors on “Becoming Human,” “I’m proud of
these new songs,” says Simon. “They reflect the person I am, the person I’m becoming,
the person I’m striving to be. Writing songs on ”becoming,” not just “being” is a powerful
tool, it’s about evolving in time and space. The music is generous, intimate,
openhearted. There’s a lot of me living in these songs. They’re deeply personal for me or
anyone listening that has been through those experiences of fear, love and hope. The joy
of freedom, of acceptance and forgivingness. Of figuring out who I am or anyone is, and
how we relate to the world. What is really going on? What is the truth behind the truth?”

“Maturing as an artist and human being has enabled me to find my own voice and
confident musical direction no matter what people say,” explains Simon. Growing up on
tour around being his Genesis, Simon naturally gravitated towards the drums as a
child. “It’s part of my musical DNA,” he explains. As a teenager, he also became proficient
on the guitar and the piano, which is how he usually writes. As children of famous parents
often do, Collins has grappled with core questions about the meaning of success and
failure. It also took years for Simon to create his own identity through his music, and he
now looks out onto a wide scope of opportunity he has created for himself through much
hard work and dedication.

“I’ve always tried to leave my songs and videos open to interpretation, but this record is
clearly about my own path and journey in the pursuit of happiness. I’m free to climb out of
that spacesuit. Lighter. Freer. I need to push things forward and push the boundaries of
being human,” says Simon.

Collins has been extremely patient about the process of renewal. “It has given me time to
untangle the complicated arc of my emotional life. I’ve known some tumultuous times. So
I’ve had to do a lot of digging and healing. In that way, the writing process for Becoming
Human was extremely therapeutic.”

Of the album, Simon says, “This body of work reflects a deep, wild existential journey and
sonic evolution. The soundscape explores a progressive fusion of electronic and rock
Influences, a cross-pollination of genres melding space atmospheres and ambient moods
with progressive pop song craft, creating a futuristic progressive sounding album.”

Guest musicians on the album include original Sound Of Contact guitarist Kelly Avril
Nordstrom, the outstanding bass player Gaz Williams, and lastly guitarist Robin Boult.
Robbie also brought his bespoke keyboard and sound design to the mix. Simon plays
some keys too, along with drums and of course, all vocals. Being Phil Collins’ son, Simon
naturally gravitated towards the drums as a child. “It’s part of my musical DNA,” he says.

“Robbie and I collaborated on many of the songs, the album also features co-writes with
Dave Kerzner and Kelly Avril Nordstrom on songs I initially brought to the mountain of
material earmarked for the second “Sound of Contact” album,” adds Simon.

In 2010, Collins co-founded the critically acclaimed band Sound of
Contact. Featuring Simon on lead vocals and drums, the rest of the band included
keyboardist/co-producer Dave Kerzner, guitarist/bassist Kelly Nordstrom, and
bassist/guitarist Matt Dorsey. The band received the Limelight Award (essentially “Best
New Band”) at the Progressive Music Awards in 2013. Their debut album, “Dimensionaut”
ended up being the fastest selling debut album by any band in the 20 year history of
Inside Out Music.

So, with Becoming Human under his belt, an album based on the many aspects of the
human condition, there is a hint of transformation through storytelling, a glimpse of
evolving consciousness. “My own,” Simon says.